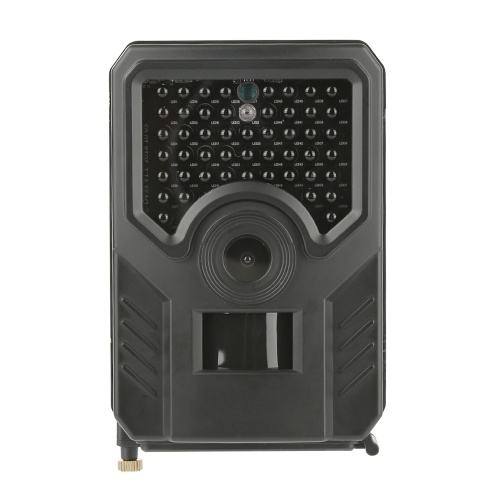 This trail and game camera comes with 49pcs black IR LEDs, and a highly sensitive PIR sensor. It can be triggered in a certain region of interested (ROI) by detecting any movement of objects or animals in an impressively fast speed of 0.8 second.

This trail and game camera comes with 49pcs black IR LEDs, and a highly sensitive PIR sensor. It can be triggered in a certain region of interested (ROI) by detecting any movement of objects or animals in an impressively fast speed of 0.8 second. It takes clear (up to 12MP) full color image in daytime, black and white image for nighttime, and 1080P video clips with sound. Its 110° wide detection angle and 3 pictures shot each time guarantee you'll never miss any unforgettable moments. This camera is not just widely used for outdoor scouting games and wildlife observation, but also popular in home and office security.

Features:
Superior Image and Video Captures: The trail and game camera captures 12 megapixel crisp, brightly colored photos in daytime (black and white at night) and 1080P video with sound.
Super Fast Trigger Speed: With 120° super wide lens angle, 110° PIR detection angle and 0.8 second impressive fast trigger speed, you are guaranteed to never miss any of breathtaking moments by multi-shot feature which can take up to 3 photos and 10s video each trigger. Each detected movement is captured quickly and documented in real time.
Long Night Vision Range: Built-in 49pcs 940nm infrared black LEDs make this camera a stealthy unit that does not intrude into the natural habitat, widely used in hunting, wildlife observation, home security, surveillance and scouting game.
Long Battery Life and Durable: This camera runs on 2pcs 18650 batteries (not included), which can reach up to 12 months long battery life. It is well built to withstand extreme temperatures between -10℃ to 70℃, IP56 waterproof and can be left outdoors for long periods.

Note:
1. Use the USB cable to connect the hunting camera with your computer for setting.
2. Before operating the camera, install 2pcs 18650 batteries for power supply, and a TF card for storing future-captured images and videos. (Batteries and TF card are not included here)
3. Since the camera has no screen, review the captured images and videos by connecting the camera with your computer via the USB cable.