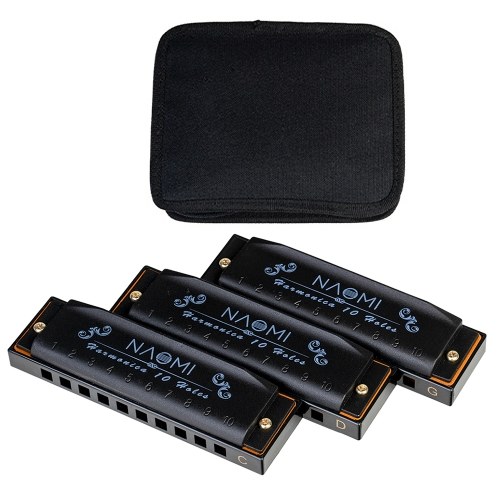 Hoodoo is an American term, originating in the 19th century or earlier, for African-American folk magic. Grafted onto this tradition are distinct European and Native American herbal and magical practices and beliefs. The term "Hoodoo Man" is used to describe a "conjurer", usually a herbalist or folk-magician. In music, the term Hoodoo was used in many famous blues songs, most notably Hoodoo Man Blues by Junior Wells, which was released in November of 1965. Junior Wells was known for his blistering Chicago blues style harp playing and his performance on Hoodoo Blues has influenced a new generation of harmonica players. Folk magic is based upon one primary as sumption: that everything is connected. To further that tradition, NAOMI is proud to connect with the roots of that magical music and launch the new Hoodoo Blues set of harmonicas.

Features:
If you want to play the Blues, the Hoodoo Blues Harmonica set has what it takes to get you started.
Three of the most popular keys (C, D, and G) of 10-hole diatonic harmonicas packaged in a handy zippered carrying case gives anyone what they need to kick-off their Blues career.
Connecting with the ever popular term "Hoodoo Man" used in many old Blues tunes depicting a folk-magician or "conjurer".
Celebrating the song "Hoodoo Man Blues" which is known for Chicago Blues style harp playing.
The brass reeds inside these harps let you conjure up that magical blues tone at a great price.