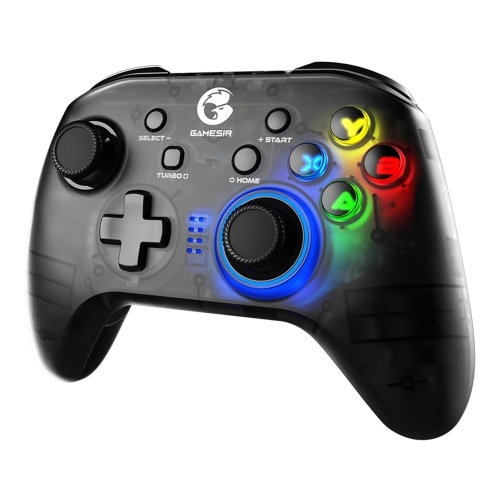 Unlike other buttons, GameSir T4 pro's linear shoulder buttons can provide performance in multiple stages. The linear button is like the throttle of a car. Depending on the strength, the speed of the car will change. In the game, you can accurately control the moving speed, attack speed, and attack strength of the game characters. The 600mAh lithium battery coupled with ultra-low power consumption allows players to have excellent wireless gaming without recharging frequently.

Feathers:
6 Axis Gyro Highly Supports Nintendo Switch Games: GameSir T4 pro has now been equipped with a six-axis gyroscope. While supporting the somatosensory operation, it can also more sensitively capture the player's movements and reflect it more accurately in the game.
Evolved For Gamers To Fully Enjoy iOS / Android / PC / Switch Games: GameSir T4 pro's chip has been upgraded in all aspects. Unlike the past, which was limited to the PC platform, this chip can now meet the hopes of players using GameSir T4 pro on multiple platforms.
Deeply Supports MFi Games: GameSir T4 pro will never lag behind the times, players can now use T4 pro to play Arcade games. Not only that, as long as it has MFi certified games, GameSir T4 pro also supports these games.
Programmable Buttons For Highly Personalized Configs: Create your own personal configuration and conquer other players! GameSir T4 pro still supports users to customize the four buttons on their backs with simple settings.
Colorful Led Backlight, Stunning Look Even In The Dark: Maybe you never imagined whether a rainbow will appear in the night, but when you turn on the GameSir T4 pro, you can see the rainbow that shines through the translucent body. What's more, you can adjust the brightness of the backlight through specific button combinations.
Warranty: If there are any problems, please contact our store in time. We will give you a satisfactory solution.

Note:
* There could be some deviations due to manual measurement or slight color difference owing to photographing condition. Thank you for your understanding.