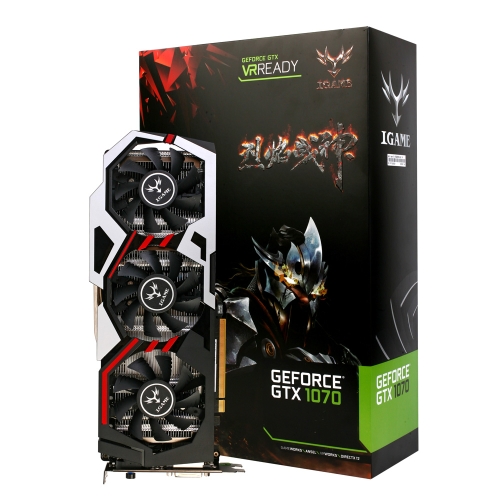 Speed up your PC experience when you upgrade from integrated graphics to the new GeForce GTX 1070 dedicated card. Enjoy all your videos and pictures at HD resolutions. Discover 2.7X VR performance improvement and 1.5X faster gaming performance than GTX 980 GPU graphics, making all your gameplay richer and smoother. The GeForce GT 1070 is everything you need for a better, faster PC experience.

OpenGL
Support OpenGL, which is a interface of application software that nothing to do with the hardware. And is a powerful and convenient 3D graphics library.

PCI-E X16
Designed for the new PCI Express 3.0 bus architecture offering the highest data transfer speeds for the most bandwidth-hungry games and 3D applications. PCI Express X16 provides ascending and descending to the bandwidth of the 4GB/s and greater than that of AGP8X 2.1GB/s of bandwidth.

SLI
SLI the double card interconnection technique, can support up to eight GPU working at the same time.

HDMI
HDMI 2.0 is compatible with all of the specifications of the HDMI before version, but special increase bandwidth to 18 GBPS, and make a key improvement to support in the consumer electronics market demand for video and audio growing experience.

Note: DVI-D can NOT convert to HDMI interface.

Note:
There may be something different about the appearance such as the PCB configuration due to different producing batches, but the GPU performance(memory/GPU code/CUDA cores/Base clock/Memory clock) is the same. Please make sure before you place an order.

based on 9 Customer Reviews